A beautifully presented and attractively designed three double bedroom detached bungalow, one of four in an exclusive cul de sac development constructed by a local builder in 2011 | Sought after location | Master bedroom with ensuite | Underfloor heating throughout.

Summary A beautifully presented and attractively designed three double bedroom detached bungalow, one of four in an exclusive cul de sac development constructed by a local builder in 2011. The bungalow has been completed to a demanding specification including ground source heat pump under floor central heating, oak effect Upvc double glazed casement windows and labour saving Upvc soffits, facias, guttering and down pipes. The property is tastefully decorated throughout and also has a landscaped Easterly aspect rear garden and a garage.

Situation St Ives is located approximately two miles from the historic market town of Ringwood, which offers an excellent range of independent and national retailers, including Waitrose, Sainsbury and Lidl, as well as numerous cafe’s, bars and restaurants which offer a diverse culinary choice. St Ives is annexed with the villages of St Leonards and Ashley Heath, and has a Hampshire address, although falls within the district of East Dorset for public services. Situated within close proximity to the highly regarded St Ives Primary School, and only a short drive from the local Doctor’s Surgery. Commuter routes are easily accessible for Bournemouth, Poole, the South Coast and Salisbury via the A31 and A338, and Southampton, and beyond via the A31/M27and M3. For recreation the Avon Valley Country Park, Moors Valley Country Park and Castleman Trailway are all easily accessible in a few minutes car journey.

Externally An attractive formal front garden laid to lawn, bounded by a border of ground cover shrubs and ornamental trees. A double slabbed pathway leads to the front entrance door. An adjacent block paved driveway leads to a semi detached garage (20 ‘x 10’) with an ‘up and over door’, electric power and light. Greenline ground source heat pump provides the under floor heating and domestic hot water. Side door provides access into the rear garden.

The rear garden is also approached via a side entrance between the garage and bungalow. The Easterly aspect rear garden comprises of a full width sandstone paved patio abutting the rear of the bungalow with external bulkhead lighting, external power point, and an attractively landscaped railway sleeper edged retaining wall with a herbaceous border above. Several steps lead up from the patio to the lawn, bounded by well stocked herbaceous borders. A further paved patio on this upper garden tier faces in a Southerly direction, and where there is also sited a timber built potting shed. There is also a further area laid to aggregates which is ideal for potted plants. On the South side of the bungalow there is a further expanse of lawn where there is sited a timber garden shed. 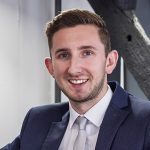